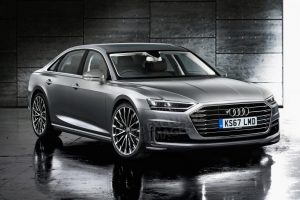 The German brand’s flagship A8 saloon has a history of lightweight construction – but engineers admit that responding to customer demands is likely to bring a small gain in kerbweight for the new version. The car’s bare metal construction is around 50kg heavier than the structure of the existing A8.

Three key factors are said to have caused the new Audi A8’s increase in mass. The first is the requirement for a full-length panoramic sunroof, because this demands extra bracing to avoid chassis flex. The second is the extra autonomous technology that will feature on the next A8; it’ll use 48-volt electrics to power an army of sensors, but the additional electronics and cameras will add extra bulk.